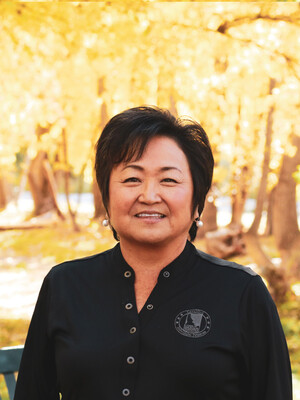 Julie VanOrden grew up on a farm north of Blackfoot, Idaho in the Rising River area. She worked on the farm from a young age, beginning with watching her mom weigh trucks in the scale house, moving irrigation pipe, picking clods on the conveyer tables, disking fields and driving trucks during harvest. She thinks she was one of the reasons her father, Masa Tsukamoto, invented the EZ Tarp for truck beds, as he saw a hazard with having her climb up on truck beds and also because her size made it hard to pull the rubber straps to tighten the tarps down.

Julie is married to Garth VanOrden. They along with their two sons, Shaun and Dillon, and their farm foreman, Clay Anderson, are owners of Garth VanOrden Farms. Their operation spans Bingham County, from the Fort Hall Indian Reservation to Shelley.

Garth and Julie started their own farming venture in 1982 with 140 acres of Russet Burbanks and 145 acres of soft white wheat. Their start at farming came with a great deal of help, borrowed equipment, and advice from Garth's dad and older brothers and from Julie's mom and dad. Along the way they also raised and educated four children, Shaun, Dillon, Jason (deceased) and Lisa. Julie states "we are indeed blessed to have given our kids the opportunity and challenge to help on the farm and to know the value and benefit of hard work. One of our personal goals moving forward is to allow our younger partners the opportunity to take what we have accomplished so far and with their talents and input, make our farm better and work even harder to grow the quality crops that our customers expect and deserve".

Julie and Garth believe they have experienced ups and quite a few downs of farming through the years, they know that weather, challenging markets, and competition from other states mandates that they have to stay sharp to stay viable in the potato industry.

From 2012-1018 Julie served Bingham County in the Idaho House of Representatives. Her assignments were on the following committees: Education, Agriculture Affairs, Natural Resources, Human Resources. She had the privilege of being the Education Committee Chairman for two years.